I'm a cautious over thinker. It takes me FOREVER to pull the trigger on something when it comes to expanding my little online shop and artist alley offerings, even when I really think it's a good idea.

I come up with an idea, research it like crazy, leave 20+ tabs open in my browser about it for weeks, read reviews, and mull it over for months, sometimes even YEARS before I do it. If I do it at all.

For example, with my button maker. I've wanted one since I was in high school, which was 10 YEARS AGO, and I only bought it 3 years ago. It took me 7 years of research and what made me finally pull the trigger was seeing other artists with theirs in the alley at Otakon. That's insane! Sometimes this over cautiousness works in my favor and prevents me from wasting money of fads and trends, but it also hinders me from expanding my side business like I should. With my button maker I wish I had bought one sooner, but with this holographic film I'm glad I waited.


I did a lot of research and contacted a LOT of (somewhat shady) businesses to get pricing on this stuff before even buying a sample. Most of the clear holographic film out there is sold in bulk, like giant commercial laminating rolls that are only available on sites like Alibaba or bindery supply shops. Sites like that seem really risky to me, especially since I'm such a small out-of-my-home venture, and that bulk-order thing made me really hesitant to look into this further, but I bought some small sample sizes from one retailer (because not all retailers offer sample sizes) to try and and so far it's been great! (But it turns out you can get the same sample size HERE on eBay too! Mine are each 5 feet long.)

UPDATE 8/25/16: There is a seller now on Etsy selling holo film, and I have bought theirs, but it is thinner than the Alibaba and eBay varieties. It's okay if you put it under mylar, but I'm not really liking it. Right now the eBay seller is my favorite since it's small quantities and less sketchy/scary than Alibaba.

When I started looking into this I found that this stuff, while awesome and very Lisa Frank-ish, is typically used for document security. By laminating things like licenses and other important paper work with a holographic finish it means that it cannot easily be replicated and copied. With that being said, there are a LOT of patterns out there, but they tend to say things like "Security" or "Do Not Copy" or have specific imagery like little globes and stuff on it. Those designs aren't too magical girl friendly, but if you keep on looking there are a few generic patterns that work out really nicely.

I requested two samples of two different generic patterns. One was small holographic dots and another was an icy fragmented design which is more like what I see other online artists using when they offer holographic stuff.

The photos online made both patterns look really bold and magical, but in real life, the two ended up looking very very different. 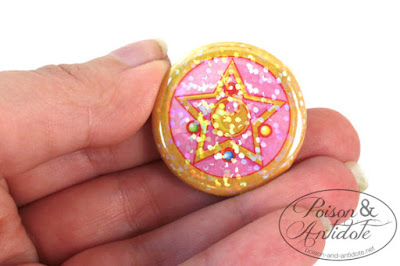 Right out of the box I could see that the dot/confetti style pattern is way more intense before I even unraveled the roll. These confetti-like bits capture the light and add a TON of sparkle. At times it's so sparkly it's hard to even focus on the design underneath! This pattern gives me the WOW factor I was looking for. It's perfect for my Sailor Moon stuff and it looks great on my current stickers and buttons. I'm definitely going to order more of this one! 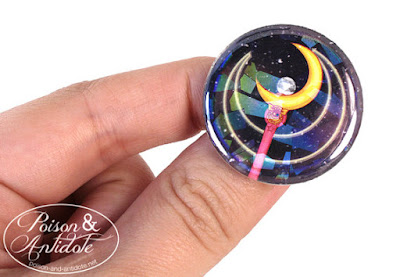 The fragmented pattern, which looked super cool in the online photos, just wasn't as intense in real life. (For the record the seller swore both patterns had the same intensity before I bought them, which turned out to be completely incorrect.) As you can see it's a lot more iridescent than holographic, but since it's more subdued it doesn't hide the design like the other pattern does. This one acts as more of an enhancement than anything else, which is nice and I'll definitely use up the amount I got in my sample (which thanks the the bulk nature of these shops the sample is several feet long), but I'm not sure if I'd reorder it. Even in this sample size.

Plus, on blue-toned images, the fragmented pattern looks even weaker. I'm pretty disappointed in the overall look if this one. but I'll still offer in my shop until I run out of it.

Maybe I'll try buying this fragmented pattern from another seller in the future to see if their product is shinier or more intense, but for right now, the little dot pattern is definitely the way to go.

I'll keep you all posted with my holographic adventures and let you know if I buy any other patterns, but for right now I'm focusing on getting my holo-stuff out there one product at a time with the two patterns I've got.