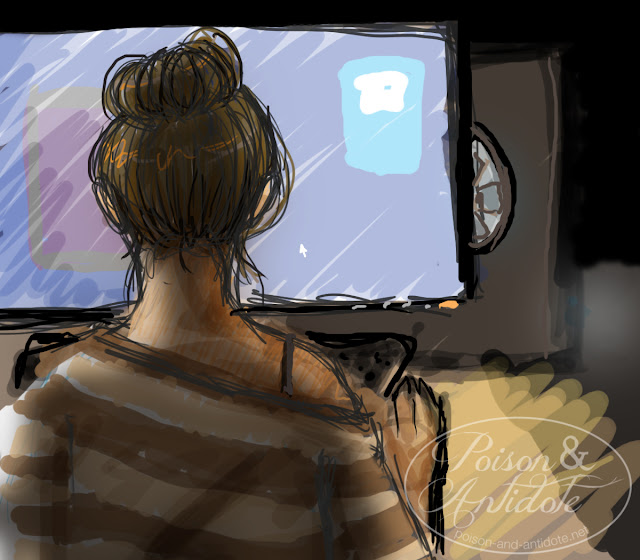 It's been fun, and therapeutic, making more posts about my graphic design day job, and while working on a few projects for clients, this list popped into my head. This is by no means the ONLY types of clients you'll run into, but these are three I get a LOT and how I handle them.

This client knows what they want. You meet up for a consultation, get the information you need to make their invite, poster, ad, whatever the product may be, you deliver a proof, and they get back to you with changes, but really, it's more additions. Then they keep on adding...and adding. You warn them that things are getting too busy, their clients/recipients will be overwhelmed by the sheer amount of (useless) information on this product, but every single word must stay as-is.

Before you know it, your carefully constructed design that was clear cut and to the point is now a jumbled sea of text. It's overwhelming, but it's what the client wants even if their recipients won't know what hit them.

Ever see the movie, "Dude, Where's My Car?" If you haven't, then there's a scene where they try to order food from a drive through and the person on the speaker box keeps the order going and adding to it by asking "and then?" Until the person placing the order snaps. That's going to be you.

My best advice on how to deal with the And Then is to show them very simple examples alongside their own hectic and jumbled one. Explain how the simplicity makes the necessary information (when, where and what) POP and allows their audience to know what they need to know without searching for it, because most people really won't search for it. Especially if this is an advertisement.
Sometimes it works, sometimes it doesn't. Clients want what they want, and in the end you'll create what they've asked for and approved, but actual physical comparisons and visuals tend to help the most. Verbal warnings and emails will definitely be ignored.
The "Crowd Pleaser"

You thought you were dealing with one client, little did you know it's actually everyone in the office.

You took on a job with one contact and you send a proof to that contact and all of a sudden a ton of emails flood your mailbox with changes. It's everyone who works there, and sometimes even their family members. They shared a group email with your proof and rather than meet and discuss among themselves what changes should be made and approved, they're all screaming their individual suggestions into the void. But it isn't a void. It's your face. Well, your inbox.

What one wants, the other doesn't. One wants this wording, another wants that. One wants red, another wants yellow. And to help out, one forwarded the design to their cousin, who does computer art sometimes, and now even this cousin is emailing you with suggestion after suggestion.

What can you do? You DELETE ALL THOSE EMAILS! Once you've figured out that this is happening, go back to your original contact immediately. Tell them that everyone in the office needs to have a meeting and that as a group they need collectively create a list of changes/suggestions. Once that has been done only the original contact can tell you what those changes are. You will deal with no one other than the original contact. (Or whomever ends up becoming the leader of this now committee project.)

Stand your ground, and if they don't figure themselves out, walk away. No matter the pay off, it won't be worth it. In the time it takes to herd all those sheep into their pen and finish that job you could have done at least 3 other jobs for normal one-on-one clients.


The "Blank Canvas"
"You know best, do something creative. But no, not that. Something else. I don't know. What's that one font people use? The really popular one? Maybe use that?"

At first this client seems like it'll be fun, they have no idea what they want so they leave it up to you and you finally get a little bit of creative freedom on the job. Which is awesome. Especially after after slaving over everything the And Then had requested. It's nice to spread your designer wings and fly...just like you dreamed of when you were a young and idealistic design student in college.

It's a lie. (Just like the cake.) Not knowing what they want is a VERY BAD SIGN. They'll hem and haw and wax and wane over every little detail, they'll be unable to come to decisions on their own, but they won't take your advice either. They're simply floating by and odds are, this job will take FOREVER because they have no clear vision of what they want, but they obviously don't want your vision either.

They probably won't approve the final design until the day before the event leaving you rushing to get things printed and possibly shipped.

Best way to deal with them? Go one step at a time. Give them choices but LIMIT THEIR OPTIONS!

These clients are easily overwhelmed by choices. Instead of a ton of questions that lead to multiple proofs with slight differences, only give them 2 drastically different ones. The less choices they have, the better.

It's like taking a kid to a fancy ice cream shop. There's 30+ flavors and reading the whole list of options to them will just overwhelm them, not to mention all the topping and cone options. Glance over the list, there's plenty there you know they won't like that will only waste time, pick a 3-4 possible flavors, and only give them those choices. They pick an ice cream, great! Then you do the same with the topping options, then the cone, and as easy as 1-2-3, you're all done and they have their finished sundae. It sounds kind of belittling, but it works.

You'll need a lot of patience to slowly lead them through that (now simplified) maze and get you both to the finished job, but keep all of the options to a minimum and you'll get there a lot faster.