It was a last minute event, with about 48 hours notice to gather supplies and make a painting with Camden City Hall theme, but I pulled it off! We had 14 painters create their own masterpieces and even with a few hiccups, like no running water, wind, and sun...it turned out great!

We had a really good turnout and all of the participants were very serious and invested in their paintings. My example piece was a bit more challenging than your usual paint party example, but they all did a fantastic job without missing a beat!

With such short notice I decided to add in a decoupage element to create more depth and visual interest, which is something I feel a lot of paint party pieces lack. I went with a vintage map of New Jersey, since Camden and city hall were the overall theme, and it worked out really nicely! Lots of painters commented on the image provided and even asked me for extras to take home and display on it's own. I had the painters create their backgrounds and then we tore up the edges of the paper to give it a more rustic look before adding it to the background with simple white school glue. I had spare print outs available, and since there were no table cloths provided, I MacGyver'd one out of the print outs and some clear tape. (You can see it on the table in these photographs.) Not only did those copies save the tables, but they also made for a killer photo background! 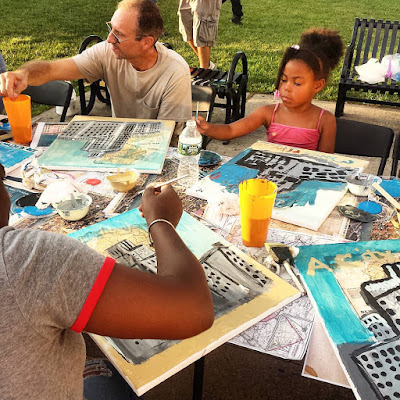 As I said, this was a last minute event and I needed materials. I didn't have time to shop for deals online so I went to the craft store and 1 pint of student grade acrylic paint was $10!! No thank you. Instead, I went over to the nearest hardware store, which was Lowe's, and bought 2 gallons of oops paint to use as the base instead! Now this is a bit tricky, since you never know what colors you'll find in the oops section, but you can't argue with the savings. I got a gallon of oops paint for the same $10! It was more pigmented, made a better base to hide the naked canvas, and it made the paintings look more interesting because the colors didn't look "right out of the tube." Or, "tubey" as my painting professors called it. At Lowe's I got a gallon of very pale blue and a gallon of a vintage goldenrod yellow. I used these two colors for the majority of our painting, and instead of white, we used the pale blue to create cohesiveness between the colors. It saved me TONS in paint costs and no one was the wiser. 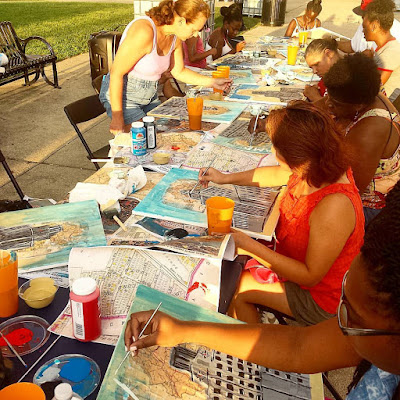 I'm all about saving money, and with only 48 hours, I had to work with what I could get, and so a lot of my materials came from the dollar store. At the dollar store I bought:

These dollar store finds worked out fantastically! Once everyone was done I could either toss them, or wash them out and reuse them again. Since we didn't have any running water at the paint party location (we used gallon jugs) I tossed the palettes and paint cups, but held onto the water cups to use them again next time. To be honest, if I had access to a sink I most likely would have washed and tried to reuse the plates and paint cups, because you could get at least 3 uses out of them, but without running water everything dried up and caked on so they had to go. No big loss, those materials cost me less than $10!

Posted by Sometimes Foodie at 8:45 AM